Notify me when back in stock

This is the configuration you are purchasing

They don't come any smaller than this!

Just like BS10 this is a fully featured mixed signal test & measurement system, a mixed signal scope in a probe!

BitScope Micro is no toy. It works with most BitScope software and it's fully user programmable. Program it in a variety of languages including C/C++, Python and Pascal or integrate it with third party software.

You can even program it directly via the BitScope VM API; all you need is a spare USB port and if you want to use it remotely or share it among multiple clients, simply plug it into a Raspberry Pi or any Windows, Mac or linux system and fire up BitScope Server for a full IP addressable network connected test, measurement and data acquisition system.

Packed with features for Test & Measurement...

You can see what's going via a set of bright LEDs for power, data, sampling and channel control.

All the inputs and outputs you need...

BitScope Micro's Diagnostic Port provides access to all the analog and digital inputs and waveform and clock outputs. 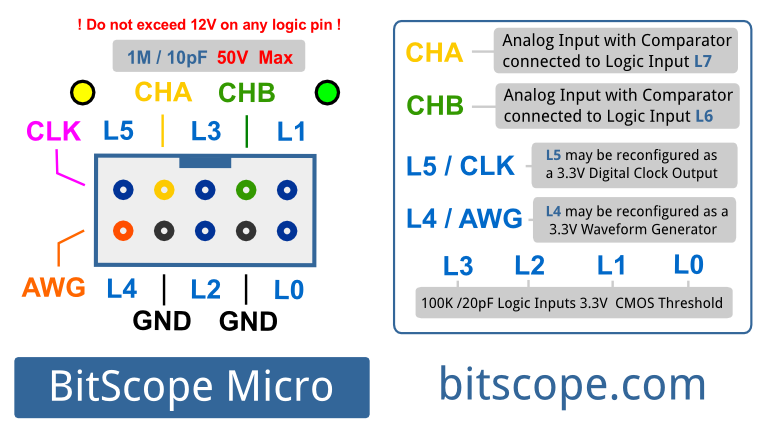 It's conveniently arranged so the two ground pins can pair with the analog inputs, waveform and clock generator outputs or logic inputs L0, L2 and L4.

Like all BitScopes this model can capture 8 logic/timing channels but in this case logic channels L6 and L7 are derived from the analog channel comparators.

This is a very powerful feature because it means the voltage ranges and switching levels for those two channels can be adjusted to suit almost any logic family, even inverted ones!

It's a dual channel digital oscilloscope...

All that's needed is a two pin header to BNC adapter which can be made for a few dollars using standard off-the-shelf components.It's specifically designed to be able to be used with standard oscilloscope probes.

In addition to the supplied mixed signal clips it means the oscilloscope probesdesigned for any BitScope can be used.

Almost any probe can be used. If you already have them they'll work with BitScope Micro. For example, 10:1 probes like PRB-04 can be used for higher input impedance or to look at voltages higher than 12V.

BitScope Micro is not designed for the BitScope dual channel active differential probe DP01 (for that you needBS10).

It's an eight channel logic analyzer...

Of course BitScope Micro would not be a BitScope if it did not also have an 8 channel logic analyzer built-in!

It's is very similar to BS10 in terms of its digital inputs and logic analysis features.

The six channels L0 to L5 are CMOS 3.3/5V compatible and switching levels are suitable for both logic families. These inputs all have 100kΩ / 5pF input impedance. For example, doubling the input range is as simple as inserting a 100k resistor in series.

Logic channels L6 and L7 are special; their inputs are derived from the analog channels CHA and CHB via the user adjustable analog trigger comparators.

It's a complete mixed signal oscilloscope...

BitScope Micro functions as an oscilloscope and logic analyzer simultaneously; it is a mixed signal oscilloscope.

Any passive probe with 1:1, 10:1 or other attenuation ratio can be used. The MP01adapter also supports active differential probes, current probes or any other BNC terminated probe or sensor designed for use with a standard oscilloscope.Using the BitScope Micro mixed signal oscilloscope probe adapter (MP01) it's easy to connect everything at once.

Check out this page for more about connecting oscilloscope probes with BitScope Micro.

It's an abitrary waveform and clock generator...

BitScope Micro would not be complete without the ability to generate waveforms and drive clocks. 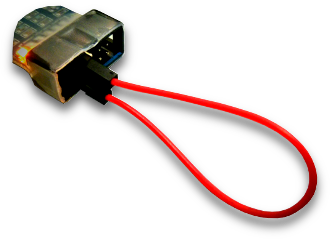 The standard waveform control panel can generate sinunsoidal, triangle, sawtooth and square waveforms out of the box.

The waveform generator in BitScope Micro is completely arbitrary; it can replay any wavetable of up to 1024 sample points programmed into it.

It could not be easier to get started.

Simply connect a loop back wire or use one of the supplied test probes to connect from the L4/AWG pin or the L5/CLK pin to any input channel to experiment with waveforms and clocks.

You can use the waveform or clock generators to calibrate oscilloscope probes, drive digital logic or test analog circuits such as amplifiers and signal processing systems.

The waveform and clock generators operate concurrently with the oscilloscope and logic analyzer functions. This means you can use it to drive logic circuits while monitoring the results or use impulse or step functions to evaluate analog system responses. You can vary the waveform parameters in real-time to produce dynamically changing waveforms. For example, create a sweep to measure the frequency response of a system which BitScope Micro can do just as well because...

It's a Spectrum Analyzer too...

There's a lot you can see in the time domain but for complete systems analysis you'll need a spectrum analyzer too. 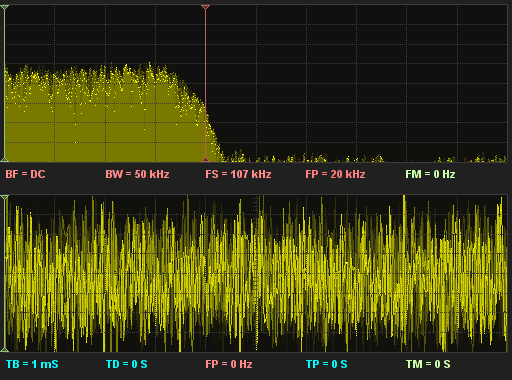 BitScope Micro is a powerful real-time mixed domain (time and frequency) spectrum analyzer too. It can be used in baseband or narrow band (RF) applications.

The spectrum analyzer is mixed domain; it operates in real-time simultaneously as the waveform is displayed. It can provide some very good insights into the operation of analog, RF & communications.

BitScope Micro is all these test, measurement & data acquisitions systems in one tiny low cost device. Most functions can operate concurrently and like BS10, BitScope Micro is very fast with aframe rate up to 50 Hz driving a digital phosphor display. It may be small and very low cost but works just like a quality stand-alone mixed signal oscilloscope. View waveforms, plots, spectra and more on its smooth flowing real-time display. Even live captured logic data can be viewed this way.

With its large buffers it can support very high speed one-shot capture for such a small device with post-capture zoom, scrolling and measurement. Alternatively stream capture direct to disk for off-line replay and analysis. In fact subject to its different specifications (e.g. bandwidth, channels, connector etc) it can do almost anything BS10 can do! 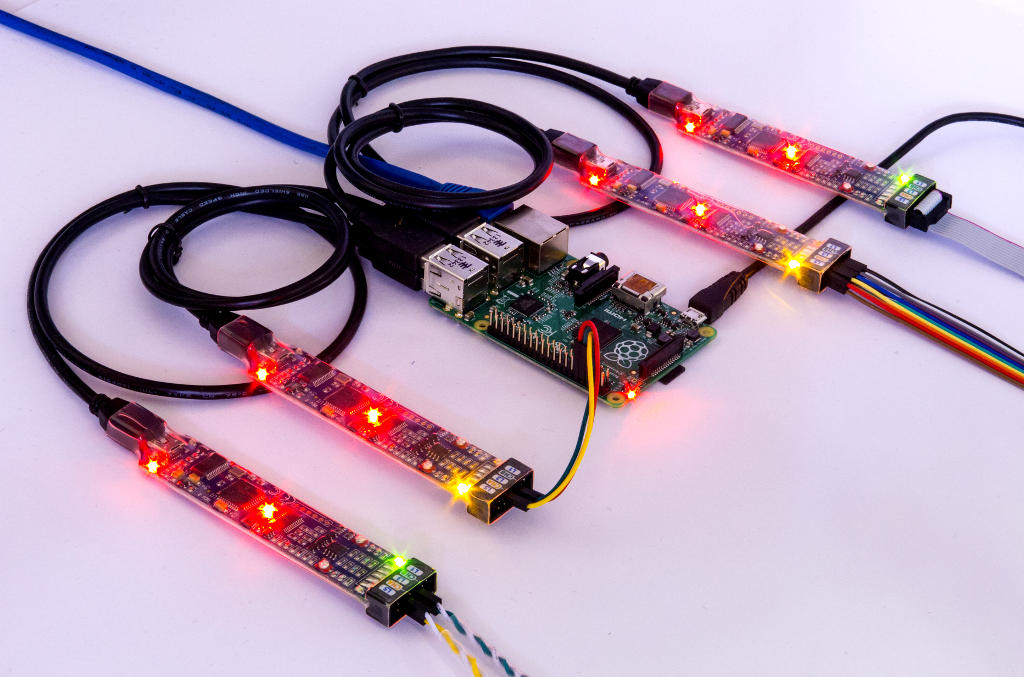 One Raspberry Pi Model B+ can connect and power up to four BitScope Micro !

In fact BitScope Micro works with any model Raspberry Pi including the newModel A+ or if you use the Model B or B+ you can connect BitScope to a network.

The BitScope DSO software application is included as standard and other options are available for download free of charge.

Almost all BitScope software is compatible with Windows, Mac, Linux and Raspberry Pi and a range of other applications are also available for download at no extra cost. Many other options are already available and more software is in development for the entire BitScope range including support for mobile and online.

We presented a tutorial webinar about BitScope Micro and Raspberry Pi.

Starting with an unboxing we show how you can set up and use the software, connect with lab equipment, use the waveform generator to learn about oscilloscopes. You can even see power line hum looks like simply by putting a finger on an oscilloscope probe.We've created this video tutorial based on the webinar to introduce BitScope Micro and demonstrate how it can be used with Raspberry Pi and other platforms to do mixed signal test and measurement.

Be The First To Review This Product!

Help other Logicware Pty Ltd users shop smarter by writing reviews for products you have purchased.

More From This Category